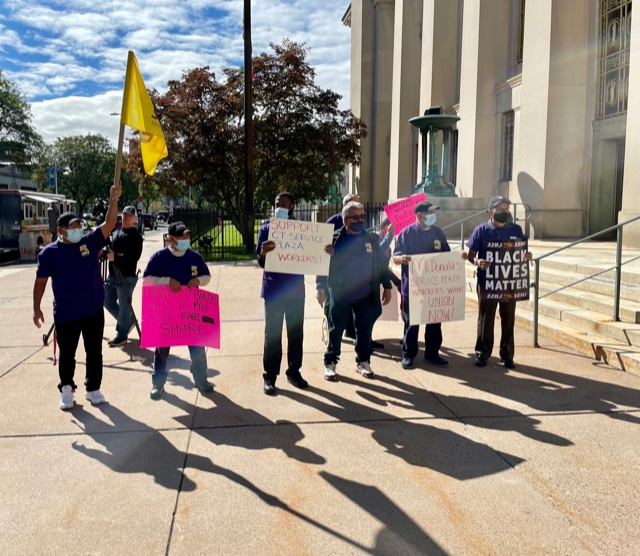 Three workers laid off from a McDonald’s at a Connecticut Turnpike service plaza filed suit Wednesday in an early test of a COVID-19 worker’s rights bill that narrowly passed in the closing hours of the General Assembly’s 2021 session.

The lawsuit accuses Michell Enterprises LLC, a McDonald’s franchisee and target of a union organizing drive, of violating a law that requires workers laid off during the pandemic to be recalled by seniority.

In the case of Michell Enterprises, the law creates a cause of action that complements a separate claim before the National Labor Relations Board that the three workers are facing retaliation for their involvement in the union drive.

The union that engaged in a multi-year effort to organize fast-food workers on the turnpike, 32BJ of the Service Employees International Union, staged a small rally outside Hartford Superior Court, where the suit was filed.

“It’s union busting,” said Rep. Robyn Porter, D-New Haven. “We know that the people that are going into court to fight today are people that fight for the union.”

Michell Enterprises, a Windsor Locks company that owns McDonald’s restaurants in Connecticut, New York, New Jersey and Massachusetts, did not respond to calls for comment.

While the union must prove retaliatory intent in the action before the NLRB,  the state recall law is simpler: The workers need only prove they had the seniority to be recalled when business picked up and McDonald’s added staff.

“It’s what I’d call a strict liability statute — there is no requirement of any ill motive or underhandedness,” said Nicole M. Rothgeb, a partner in the firm that filed the lawsuit, Livingston, Adler, Pulda, Meiklejohn & Kelly.

The firm has strong labor ties, and its clients include the State Employees Bargaining Agent Coalition.

Porter and Sen. Julie Kushner, D-Danbury, co-sponsors of the law and co-chairs of the legislature’s Labor and Public Employees Committee, said the measure provides legal protections to a most vulnerable sector of the workforce.

The plaintiffs, Mario Franco, Pilar Mestanza and Rosa Franco, are immigrants who live in Stamford and were long-time employees of the McDonald’s at the service plaza on I-95 in Darien. All three were laid off on Oct. 14, 2020.

“I was one of eight workers who also were let go and were never recalled. We didn’t get any phone calls. We didn’t get anything back. They just didn’t contact us.” said Mario Franco, speaking through an interpreter.

He had worked at the McDonald’s since Oct. 17, 1995. His wife, Gladys Ortiz, also an employee, died after fainting and striking her head while working five years ago, he said.

The suit has larger implications than recovering back wages and other damages for the three workers. 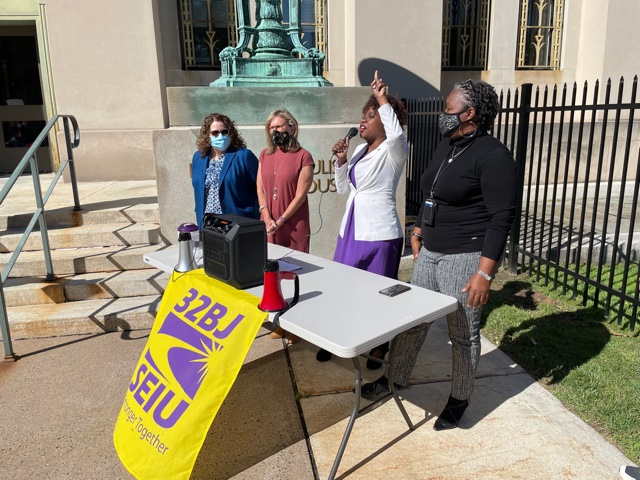 Rochelle Palache, a district leader in 32BJ, said seeing three activists regain their jobs would inspire confidence in the union drive. The union has been trying to organize them since 2019.

The law allows plaintiffs to recover punitive damages and legal costs as well as lost wages.

Supporters of the law say it is necessary to protect low-wage minority workers, who were disproportionately affected by the earliest layoffs due to pandemic-related restrictions on the hospitality industry.

While the three plaintiffs are involved in an organizing fight, the law had the broader intent of discouraging employers from using the pandemic to replace senior workers with lower-paid entry-level employees.

“It’s just about greed when the employer says, ‘I’m gonna hire someone back who’s cheaper.’ And that is disgusting. That is unacceptable in the state of Connecticut,” Kushner said.

A labor crunch, however, has forced some Connecticut fast-food restaurants to offer starting pay above the current $13 minimum wage. It rose from $12 to $13 in August and will hit $14 next year and $15 in 2023.

“But the bottom line is that it was absolutely clear to the majority of legislators that we had an obligation to workers to make sure that if they were laid off because of the pandemic, that when these businesses rebounded, that those workers were owed their jobs back. And that was a very important piece of legislation,” Kushner said.

Kushner and Porter said they may file legislation next year delaying the expiration date, since the recovery is almost certain to continue past May.

The state’s largest business organization, the Connecticut Business and Industry Association, had lobbied against the bill, saying businesses should have the discretion to recall the employees deemed most valuable.

The Senate was evenly divided among Democrats and Republicans in 2017 and 2018, stopping passage of bills sought by labor.

But Democrats won a strong majority in 2018,  leading to passage in 2019 of laws raising the minimum wage and creating a paid family and medical leave program. The 2020 session was largely canceled, due to COVID.

An aggressive labor agenda in 2021 revived the perennial debate over the degree to which a small state with a chronically soft economy should be the tip of the spear in a campaign against inequality in the workplace.

Business interests complain that labor is using the General Assembly to achieve what should be the subject of collective bargaining.

Kushner, a retired UAW official who unseated a conservative Republican in 2018, said the experience of the three plaintiffs demonstrate the need for strong protections.

“It’s really easy to see in this particular case why doing this legislation was so important,” Kushner said.

How solar energy got so cheap, and why it's not everywhere (yet)

Alarms raised at many universities over sexual assault...

Students, faculty rally to keep the ‘community’ in...

Southington restaurant decks the halls for the holidays...